Artists
/
Artist
/
Biography
Submenu
With their bright and airy appearance, Balzer’s works consistently exude a joyfulness that has evolved throughout the course of his long career. Balzer plays with the confines of two – and three-dimensionality, as well as positive and negative space in his wood and foil constructions, resulting in a playful commentary on space and form. Sculptural in nature, Balzer meticulously assembles each work by building up shape upon shape to create complex forms of astounding geometric precision. Even so, the flatness of the vibrantly colored foils that ornament all of Balzer’s surfaces, when viewed upon a wall, gives the works an unmistakable painterly feeling.
These works draw upon various art historical movements; especially Constructivism and Minimalism - both of which are especially apparent in the perfectly clean appearance of his works and his recurring use of rectilinear forms. 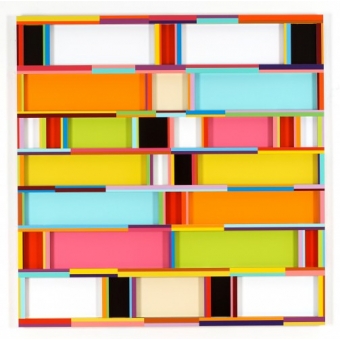