Submenu
JanKossen Contemporary is pleased to present Le Bateau Ivre (“The Drunken Ship”), the second solo exhibition featuring works by German artist Jürgen Jansen in the United States.
Le Bateau Ivre features mixed media works on panel. Using anything but a brush, Jansen applies the mixture of oil, mineral spirits, and resin. Through 30-40 layers, Jansen creates a glass like surface with depths of colour and brightness.
Titled after a verse-poem by Arthur Rimbaud about a sinking ship drifting at sea and is known for its vivid imagery and symbolism, which is mirrored in the vibrant and contrasting colours used by Jansen. Furthermore, it is a surreal poem written from the perspective of the ship itself, wherein it describes its many transcendent sensory experiences. The artists’ pieces exuded a joie de vivre through the vibrancy and emotion expressed in the marks and gestures.
While listening to 80s pop music (which often inspire the titles of his artworks), the artist attacks the canvas from all angle; He moves around the canvas which he has placed flat on the floor, and even climbing ladders to achieve the desired effects of chance which permeate through his work. The artist lives and works in Dusseldorf, Germany.
+ Share 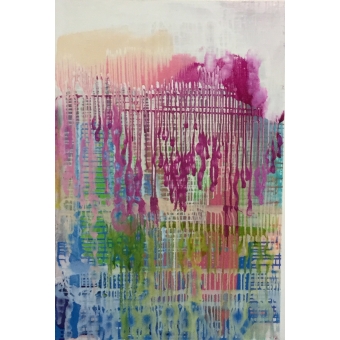