Artists
/
Artist
/
Biography
Submenu
Atif Khan is a highly respected associate professor at National College of Arts with an illustrious career spanning over 20 years. His prints contain elements of Mughal iconography. The work itself is complex and multilayered with many surprise elements slowly unveiling themselves. Muhammad Atif Khan was born in 1972, in Sahiwal, Pakistan. The artist graduated (with distinction) in Fine Art from the National College of Arts in Lahore in 1997, and a year later was awarded the UNESCO-ASHBURG Bursary, to complete a residency at Darat-al-Funun in Amman, Jordan.

In 2007, Khan received the Commonwealth Arts & Crafts Award. He was also appointed artist in residence at the Swansea Print Workshop in Wales, the London Print Studio in England, and the Glasgow Print Studio in Scotland.

The artist has participated in art workshops in India, Bangladesh and Jordan, and has exhibited throughout Pakistan, India, the USA, several European countries, Australia, Dubai, Jordan, Singapore and Hong Kong. Alongside his artistic practice, Khan is the faculty member at the prestigious National College of Arts in Lahore, Pakistan. 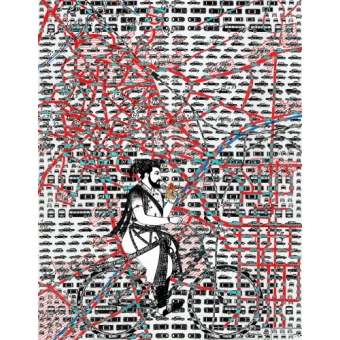